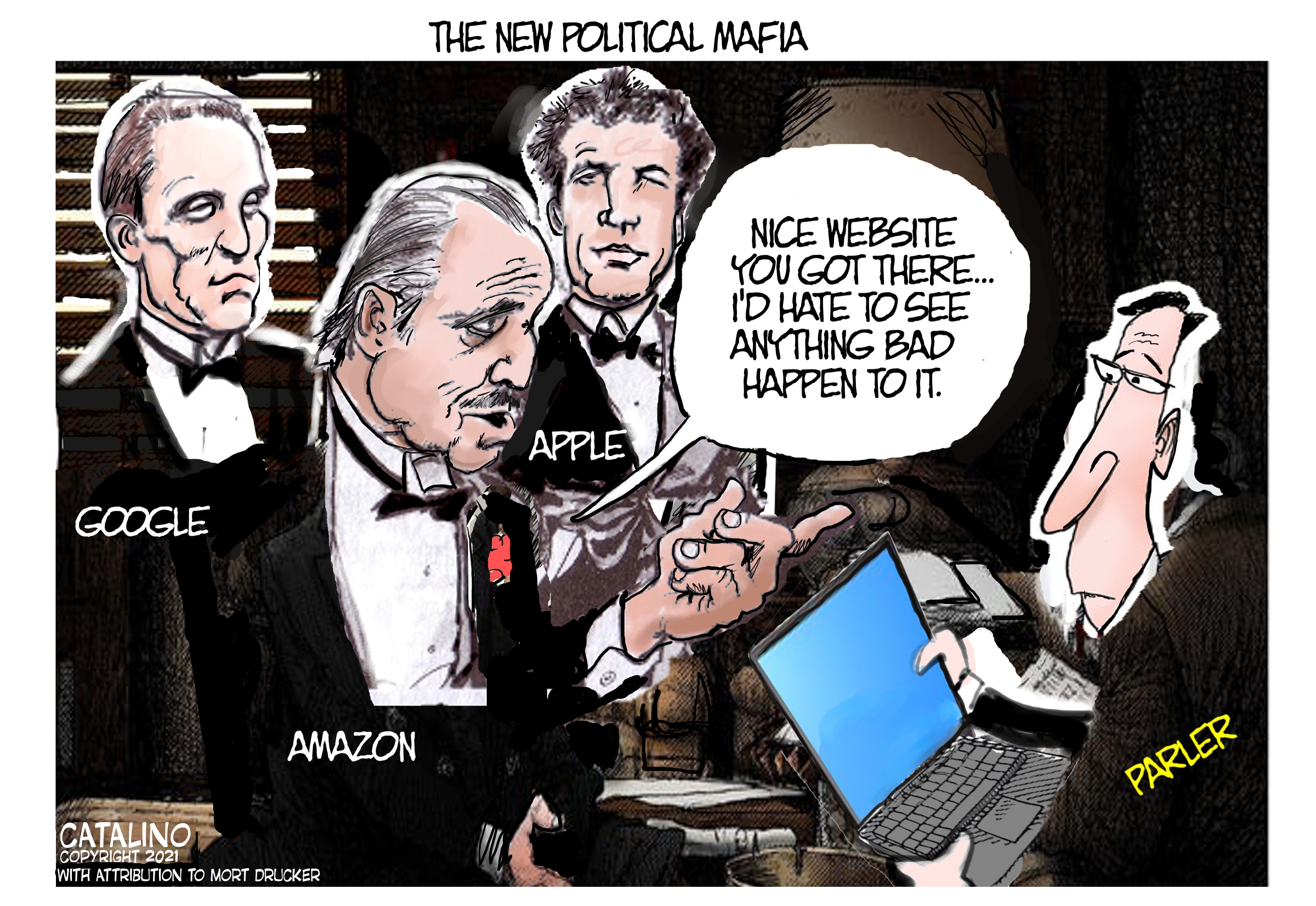 This week’s social media ban of President Trump and other conservatives isn’t a violation of the First Amendment. It is a violation of common sense — and the precedent it sets is no less scary.

The First Amendment prohibits government censorship of speech, rather than decisions by private companies. But the censorship of certain users by powerful tech companies — companies aligned with one political party — still set off alarm bells across the ideological spectrum. The ACLU warned of the “unchecked power” of Big Tech after Twitter’s ban of President Trump; even German Chancellor Angela Merkel, no fan of the president, said the move was concerning.

Not only are these tech platforms banning individual users for their views, but have now moved to ban Parler — a competing social media platform they don’t own. Apple and Google have removed the app from their online stores, effectively making it impossible for users to access this service.

Amazon put the final nail in Parler’s coffin by kicking it off their cloud servers. After Amazon made the move, Parler’s website became unreachable. Millions of people were silenced, no matter what they were discussing. (Not everyone on Parler was ranting about the election—there were still cat memes, food pics and complaints about the kids being home from school.)

Within a matter of days, Parler went from being the number one app on Apple’s App Store to being unreachable.

The justification for banning Parler? Apple, Google, and Amazon claim that Parler doesn’t police its users’ comments enough. This is rich coming from the companies fighting tooth and nail to keep Section 230 of the Communications Decency Act that offers tech companies legal protection from their users’ false claims.

Are Apple, Google and Amazon applying the same standard for other apps on their platforms? Twitter currently allows violent foreign leaders access to their platform, including Iran’s Ayatollah, Venezuela’s Maduro and Turkey’s Erdogan. Allowing Twitter to host these people is an unbelievable hypocrisy.

Parler CEO John Matze said that the situation was a “coordinated attack by the tech giants to kill competition in the marketplace.” He raises a good point: Could it be coincidence that within 48 hours the three giants all elected action that would kill a private company? I expect litigation will be considered regarding possible breach of contract, tortuous interference of business, anti-trust and conceivably RICO given the close timing of the 3 tech companies action to suffocate the smaller Parler.

Historically, when conservatives got frustrated with the biased reporting of the mainstream media, competitors emerged to fill the gap. But imagine if CNN and Comcast were able to strangle a fledgling Fox News in its infancy — denying it access to viewers. (Or if The Washington Post could pressure suppliers to keep The Washington Times from buying a printing press.)

While Mr. Trump is a unique and often inaccurate social media presence, tech platforms are using him to set a disturbing censorship precedent. Their justification for banning him is that Mr. Trump made an unsupported claim that the election was stolen, thus creating a potential for violence. To be clear, Mr. Trump has not specifically called for violence using social media platforms — he riled up his base with false claims. Using this logic, any number of people could be banned from social media. For instance, some activists who claim all police are racists are repeating a falsehood that can and did lead to violence last summer.

If Twitter existed in 2000 during the Bush-Gore election, millions of Democrats would have used the platform to falsely claim that the election was stolen from Mr. Gore — just as Republicans now falsely say it was stolen from Mr. Trump. Sunlight on these inaccurate claims, rather than censorship, is the best disinfectant. The misinformation, frustration, and hatred that drove rioters to enter the Capitol will not disappear because some executive at Amazon wants it to go away. If anything, it will only cause these sentiments to fester.

The attack on the Capitol — and our democracy — was bad enough on its own. Big Tech should not be allowed to use the attack as an opportunity to stifle the speech of millions.

This article originally appeared in the Washington Times.